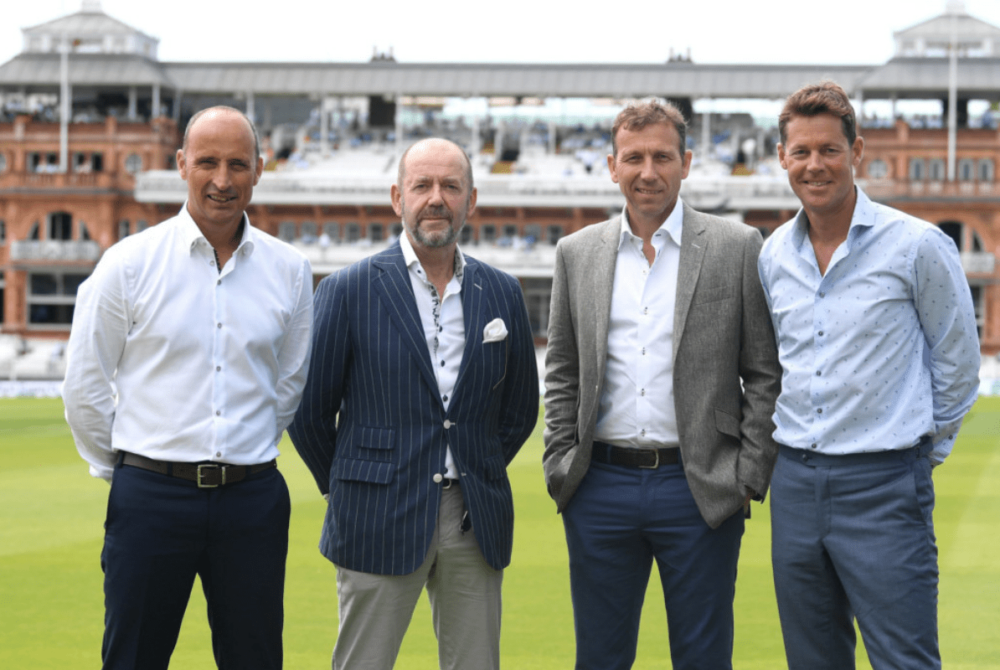 Sky Sports’s top order has been scoring heavily in the men’s style stakes by bringing Trotter & Deane fashion to the commentary box.

Nick is a fully signed up member of the Trotter & Deane fan club, having been a customer for over a year. He was also named as our first brand ambassador in 2018, a role in which he has now been joined by another ex-England cricket star, Sir Alastair Cook and former jockey Freddy Tylicki.

Our MD, John Deane-Bowers said: “Nick was a very stylish cricketer, who played for England and captained Warwickshire. It’s not surprising that he is now a very stylish advocate of own niche brand”.

Nick’s on-screen style caught the attention of his producer and Sky Sports colleagues last year, prompting the former opening batsman to arrange a meeting between us and the team. John went down to Sky HQ in December, resulting in a flourishing partnership which has seen us create bespoke garments for the two ex-England captains, Nasser Hussain and Mike Atherton.

A far cry from the white flannels they wore as top order batsmen, we created stylish outfits for the pair. Comprising bespoke shirts, trousers and jackets, each tailor-made to their own unique measurements by our expert personal tailoring assistants, the outfits are proving to be a big hit in the press box.

This summer cricket has attracted huge interest due to the home team’s success in the Cricket World Cup, and their attempt to win back the Ashes Urn from old adversaries, Australia.

With sell-out crowds and record TV audiences, this collaboration means Trotter & Deane fashion will be on show to the world.

If you want to follow the lead set by England’s former batsmen, come and visit us in our Bury St Edmunds or Cambridge stores. Our selection of menswear could give you the edge over the competition.

Be the first to hear of our new collections and offers.
An email will be sent to confirm signup, you can unsubscribe at any point & all data is stored securly as set out in our privacy policy.

By continuing to browse or by clicking “Accept All Cookies,” you agree to the storing of first- and third-party cookies from Trotter & Deane on your device to enhance site navigation, analyse site usage, and assist in our marketing efforts